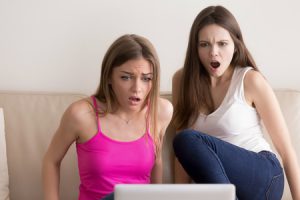 Facebook, Twitter, LinkedIn, Snapchat, Spotify – the list of social media sites go on and on.  Social media sites are the most visited sites on the Internet simply because people are interested in others.  And each site generates revenue due to the content users create – each message you post, each link you share, provides content which draws in your friends, business colleagues, and family.  And because your content generates revenue, the social media sites want to make it as easy for you to post anything you’d like on their sites.  And this is where it becomes important that you are aware of what you are posting.

Think, for a minute, just what you post on Facebook or LinkedIn.  Now, try to remember who all your Facebook friends are, or your LinkedIn colleagues.  Can you?  If you can’t, you might have posted something that you really did not want someone else to see.  All of the social media sites have tools that allow you to create groups of friends, and manage just who can see what posts.  But most people don’t use these.  Rather than trying to remember who will be viewing your posts, the best rule of thumb is to post only what you wouldn’t mind everybody seeing.

Sharing posts is not the only way your personal data gets shared with social media sites.  Take Facebook for example.  Facebook uses your posts, your preferences and your images to create a profile of you that it can then use to serve you relevant advertising.  In addition, Facebook creates a detailed “shadow” profile for you that connects you to your “friends” – whether or not you’ve added that person as a friend in Facebook.

You still may not be convinced.  In that case, here are two more reasons why you want to protect your information.

The first reason is because the social media site might be hacked.  This can happen due to the security procedures in place at the site itself, as happened when 6.5M passwords were stolen from LinkedIn in 2012.  Or, it could happen because you inadvertently stayed logged into a social media site on a computer a others have access to.  Either way, your once personal posts now become public.

The second reason is because social media sites keep your information, and provide it on request to government authorities such as the police.  Using every security option or deleting all your posts probably won’t help – sites keep a history of every post you make, and back it up, and can provide it to government authorities on request.  As an example, Facebook reported that from mid-2016 to the end of 2017, it received 78,890 requests for account data globally.

The danger of social media is that anything you share or post can become public. So, YouDefense.com’s rule for protecting your data on social-media sites is: only post what you wouldn’t mind everybody seeing.

Another Round of Apple Email Scams

Ransomware Attacks: What is Ransomware and Simple Steps to Avoid Your Files Being Held for Ransom

Our mission is simple: Do the research and provide you the clearest, most reliable insights and tools to avoid the dangers that actually threaten you and your loved ones' lives, health, and sanity most. No fear-mongering. Just truth. Join us and get The Top 10 Threats to Your Life in 2018 report free instantly: